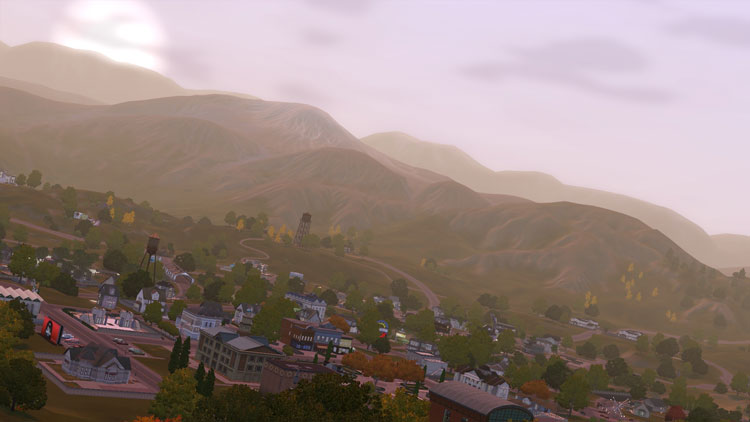 Description: Large lively town nestled near the foot of a mountain and its river

Since April 2013 I’ve been working on the world of Mayfield Springs. Without any CAW experience in the past I started to build a world with the aim to create something that features every important aspect of every expansion pack that was added to The Sims 3. The world became bigger and bigger, because I really wanted to add every necessary feature, but it was totally worth it. And because of its large variety in lots, the world also contains lots of different Sims and styles and that’s something what can make the world more (and longer) fun I think. That’s at least something I realized while tested the world and why I really like the world how it turns out to be. Hopefully you’ll all like it too!

One last thing is that, because I built the world myself, it’s a bit hard for me to make a neutral review, so instead I’ll just give you a quick summary of the word itself and its features. 😉

The town center
On these screens you’ll find the center of the town. Like most CAW towns this was the first part of the town I built. It was even more than a year ago, I think, that I started on the lots. This place features, as you can see, the main rabbit holes and some of the main community lots. The style I used there is pretty straightforward I think, so this isn’t going to be the most special part of the town, but it supplies a good foundation for the rest. Around the center I built the more ‘normal’ styled houses you’ll find in Mayfield Springs devided in several different communities. Like I said, they don’t really feature a specific style, but they’re mostly just some basic, mainly cheaper, family houses that will be suitable for a lot of players who don’t like the other prestyled houses. And lastly you’ll find a little industrial side at the lakeside. That neighborhood mainly contains the ‘poorer’ bars and clubs, but it’s a good alternative to the richer lounges and other stuff at other places of the town.

Shopping district
This is a kind of a shopping district, I never knew why I called it this way, the area just looked like one even though The Sims 3 doesn’t even feature shops (except the consignment store), and the second neighborhood I added to the town. It features most of the important community lots in the world. Mostly the ones from Ambitions, but also some from other expasion packs. I decided to give it a completely different look and style than I used in the ‘older-looking’ town center, to give the town again some diversity. But despite that, I think it still fits really well into the rest of the world.
Next to it is another small modern neighborhood. Here is where some of the celebrities live, but that’s something you’ll discover quite fast when you play in the world.

The horse farm community
In this part of the town you can find a little horse farm community. The neighborhood is, as you probably already guessed, mainly focused on the Pets expansion pack and especially horses. All lots feature a country style to fit in the community and give it something unique from the rest of the town. Although it wasn’t my favorite style to use, the houses still fit really well into the world and give it again some more variety.

The ‘poor’ neighborhood
Here is located the ‘poor’ part of the town. Right from the start I really wanted such kind of neighborhood in the town, but I had no idea how to add that into the world, because I was too afraid that they would become too isolated from the rest of the town because it doesn’t really match well with any other style I used. Despite that fact, I just added them to the town at this place without many other houses around it, so that the constrast with the rest of the houses wouldn’t become too large and I think that turned out to be a good decision.

The vineyard
Here, at the very end of the town, is located another farming community. This one, however, is more focused to be a vineyard or something. Everything here looks also a lot richer the other farming neighborhood. The community doesn’t have many lots, but it features the nectary and two ports. It’s still one of my favorite neighborhoods of the world.

The ‘rich’ neighborhood
As the counterpart of the poor side of the town is here the rich part of the town. It features three modern villas and they all have a beautiful scenery around them. Two of the villas are occupied by families and both of that families include solely celebrities.

This item has been archived.

The Sims Catalog has saved a copy of this item in the Sims Cloud archive. We have done this to protect creations from being lost in the event that their host website is closed down. If the original download links above no longer work, you can still download an archived copy here:

Be the first to review “Mayfield Springs” Cancel reply